Today started early at 5:30am with a skype chat with Ana and Paulo in Portugal. Today is a Wednesday and the weather was mild. I did my volunteer job at the Goolwa Museum in the afternoon and am continuing to knit baby clothes for my 4th grand-child due in 3 months time. Take 12 photos on the 12th of the month showing your day.

Click the left-right arrows on the pics to scroll through the 12 images. 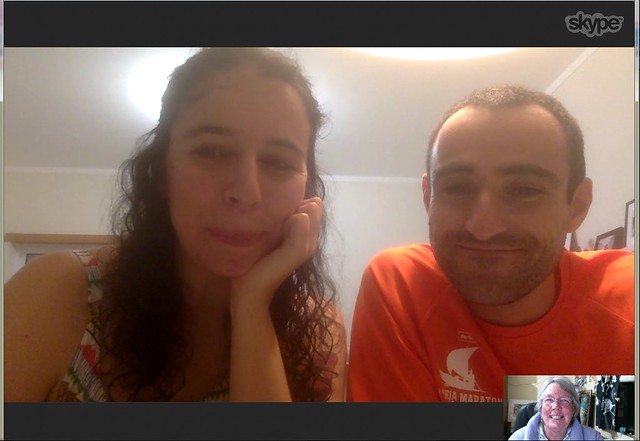 Take 12 photos on the 12th of the month showing your day. A day at home again. Last week was my action week with family and car dramas. This week I am back home from interstate, my son is out of hospital, the car is fixed and it is an ordinary day here on Hindmarsh Island. The day was clear and sunny for majority of it but a storm came in late afternoon but most of it passed us by with only some light rain, though we did have a power failure.

I had mentioned to my friends before leaving Australia that I had never seen a palace or a castle. Australia doesn’t have them. Berlin has the recently restored Charlottenburg Palace in the city and Paulo, Ana and I went to have a look. The Palace was actually two palaces that had been built and added onto over several hundreds of years. It was destroyed during WWII and was meticulously reconstructed.

We got the free audio tour and it was very interesting. At the entrance of the palace stands a large equestrian statue of the Great Elector. It was designed in 1698 by Andreas Schlüter and commissioned by king Friedrich I, the elector’s son. At the base of the statue are four chained warriors, symbolizing the four temperaments (which stem from the Antiquity where they were used to describe personalities). The statue was originally located in front of the Stadtschloss at the Museum Island, but during the Second World War the statue was submerged to the bottom of the Tegeler See, a large lake in Berlin. The statue was recovered in 1952 and after a restoration it was moved to the Charlottenburg Palace.