There was an unfortunate accident just out of Goolwa yesterday where a car tried to beat the Steamranger steam train across the crossing and guess who won?

The train of course!!

I felt very sad for the train operators as they had been doing this engine up for the last 2 years and this was its debut run from Mount Barker through to Victor Harbor. This group is all run by volunteers and the same with the repairs of train rolling stock.

The thing that has made me annoyed is that the news were reporting the accident as the train hit the car. As if the train could go anywhere else but the rails. The car driver was negligent not the train.

The area I live in is about to have a Federal by-election. Our former member moved onto other things 12 months after the election. Our seat of Mayo was a very safe seat for the Liberal Party with former foreign minister Alexander Downer holding the seat for many years.

Now that we have a by-election there has been much speculation and politicing with 11 candidates standing for election , many are independants, not affiliated with any major political party. Most have been running a campaign on the lack of water in our area.

I emailed 10 of the candidates (who had email addresses) asking specific questions on non-water related issues.

Some of my questions asked

END_OF_DOCUMENT_TOKEN_TO_BE_REPLACED

The Alexandrina Council which is the council that covers Hindmarsh Island, towns and district around the Lakes and Goolwa have showing in the Goolwa Council office foyer a Water Watch meter showing the current state of the River Murray in Goolwa. It makes for some sobering viewing 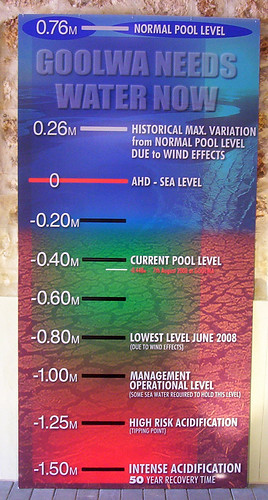 The Alexandrina Council which is the council that covers Hindmarsh Island, towns and district around the Lakes and Goolwa have taken a pro-active stand about the lack of water and how it is affecting the communities and business about the Murray River situation.

They have launched an ‘Impact of Drought and low water Levels’ website that has a wide range of items and comment on it from farmers, businesses, scientists and ordinary people etc.

Also of interest is a video by National Geographic on the impact of the low water conditions in the Coorong and the implications of this on the RAMSAR Convention agreement.