Week 4 was still in the Georgian period with George III. The recipe I cooked this week was Barley Soup 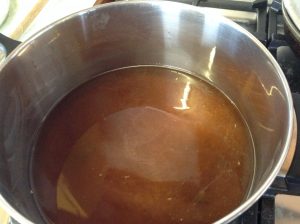 I added the barley to the stock and bought to the boil. 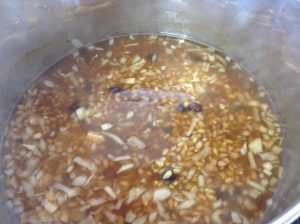 Simmered for 40 minutes until the barley was soft and the stock had reduced by half. This was too thick so I added more water and bought it back to the boil. Added the raisins and onion and while the recipe didn’t mention cooking the onion I let it all boil for a few minutes as I didn’t want raw onion in my soup. 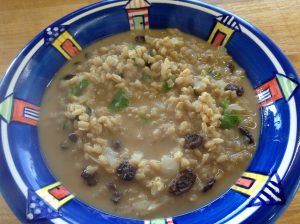 The finished soup with cream and parsley added.

It tasted okay, a little bland and was very full of barley. If I make this again I would also add some vegetables and meat. It would make a good stew.

Week 5’s recipe I am not going to make. It is a Victoria sponge and having made sponges previously all that was really different was in the execution and that it was mixed using your hand. If I had made the sponge I would have had to eat it all myself.