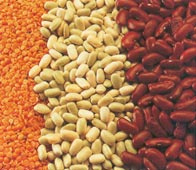 Week 2 of the Bean Cuisine class saw 7 of the original 10 turn up. Class started late because the hall where the kitchen we were using was locked and we had to wait until someone came and unlocked the premises. Seems there had been a mix-up with leaving the door unlocked by the hall owners. In the end there were 8 of us with one class member arriving late. He ended up not participating in the kitchen because we were all well into preparations by then.

I made the Butter Bean Dip

Toast pitta bread and cut into pieces for dipping 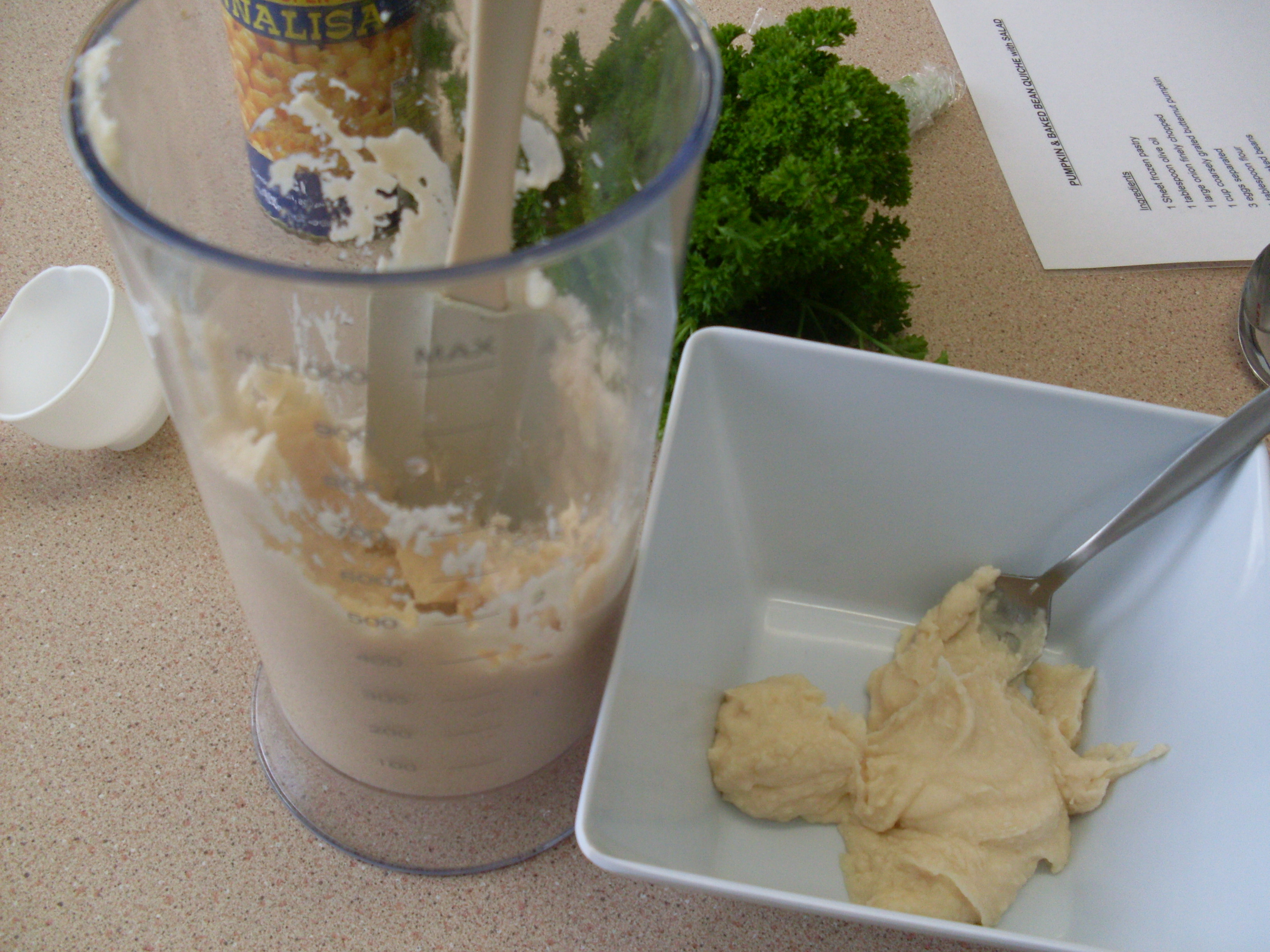 Well there was no olive oil supplied so I used Rice Bran oil. 1 or even 2 tablespoons wasn’t enough oil as the beans were too stiff when pureed. I probably added about ½ cup of oil to get a smooth paste. I was liberal with the garlic (I like garlic

). We didn’t have pitta bread but lavash instead. I toasted it in triangles in the oven.

At the tasting the dip was fine but the class decided it needed a bit more flavour in it other than garlic, possibly lemon juice or even some salt and yet everyone kept going back for more. The celiac man bought his own rice biscuits to use with the dip. The dip got finished.

Saute onion in oil until onion becomes transparent. Add garlic and capsicum. Saute another 2-3 minutes. Add stock, tomato paste and corn. Mash 2 cups of beans and add to pot along with whole beans and seasonings. Simmer 30 minutes on low heat. If too watery, remove cover and cook for another 10 minutes. 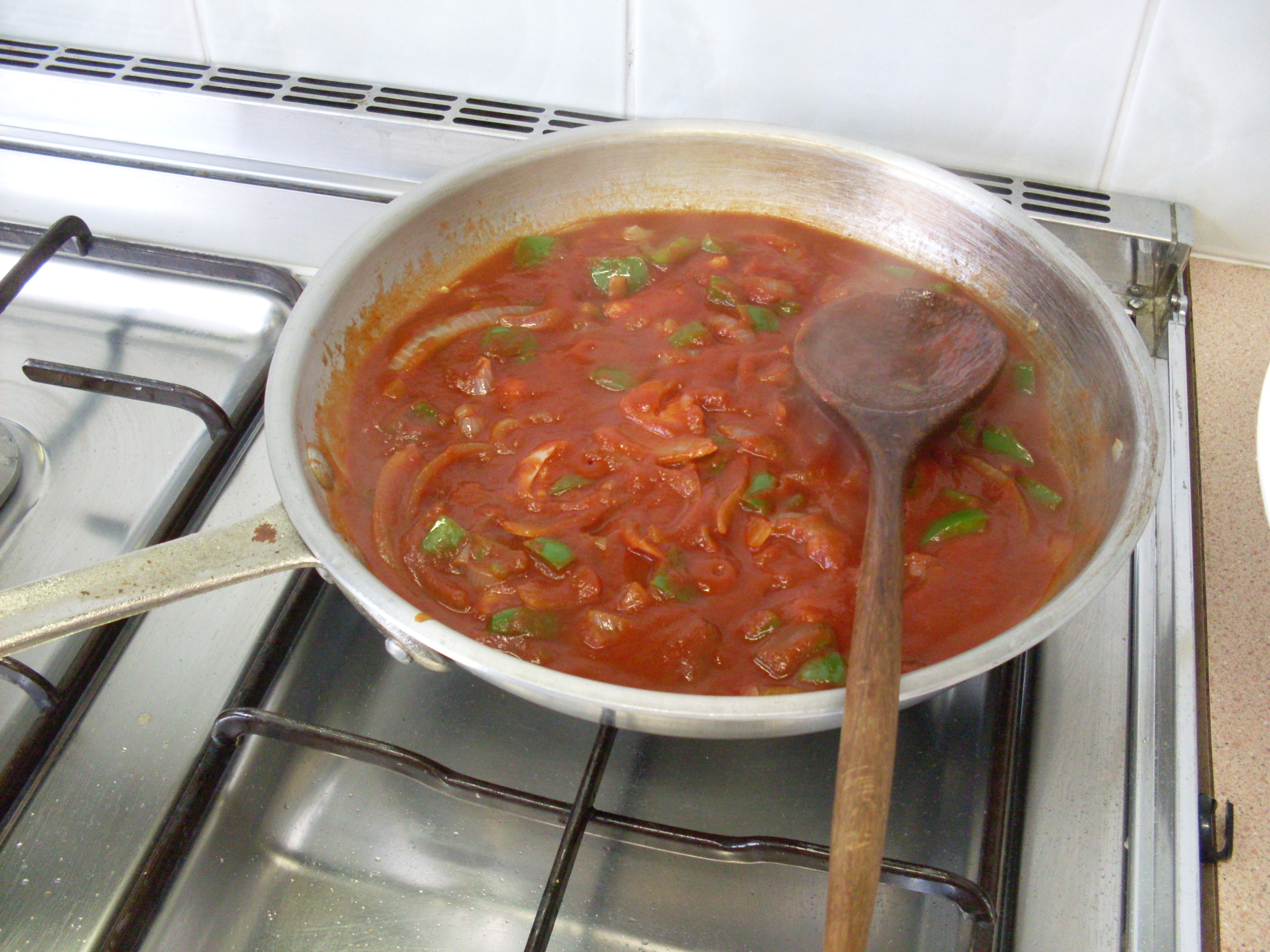 This had a lot of flavour and was very nice. It was served without any accompanients but would have been further enhanced with either taco shells or corn chips. It was very popular and was a hit.

Preheat oven to 200ºC. Cut pastry to fit a 20cm x 5cm deep quiche pan and cut away excess pastry. Bake pastry case 5 – 7 minutes. Fry pumpkin and onion in oil until onion softens. Remove from heat and beat egg yolks and flour. Fold in baked beans and pinenuts. Beat egg white until stiff and fold into the baked bean mix. Pour into pastry case. Bake in oven for 10 minutes then reduce heat to 180ºC for 25 minutes until centre is well risen and golden. Remove and let stand for 5 minutes before serving with salad.

Well because there was a member of the class with celiac disease the main teacher prepared at home a base for the quiche made from polenta and so the pastry wasn’t used. 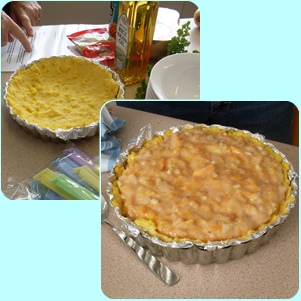 The hype surrounding the quiche was short-lived, the mixture had been thickened with flour and so the celiac man didn’t have any. It also was still runny in the mixture even though the baking instructions had been followed correctly. Neither instructor had actually made the recipe so weren’t aware that the cooking time wasn’t long enough. It tasted fine but was really very ordinary.

Drain split peas and blend in food processor until smooth. Add flour, baking powder, cinnamon, sugar, milk and eggs. Blend to form a thick batter. Gently stir in slice banana. Heat margarine in a non-stick pan, pour in 2 tablespoons of mixture and swirl evenly over base. Cook for 2 minutes or until bubbles appear on surface. Turn over and cook until golden. Remove and keep warm. Continue with rest of batter. Dust with icing sugar and serve with ice cream. 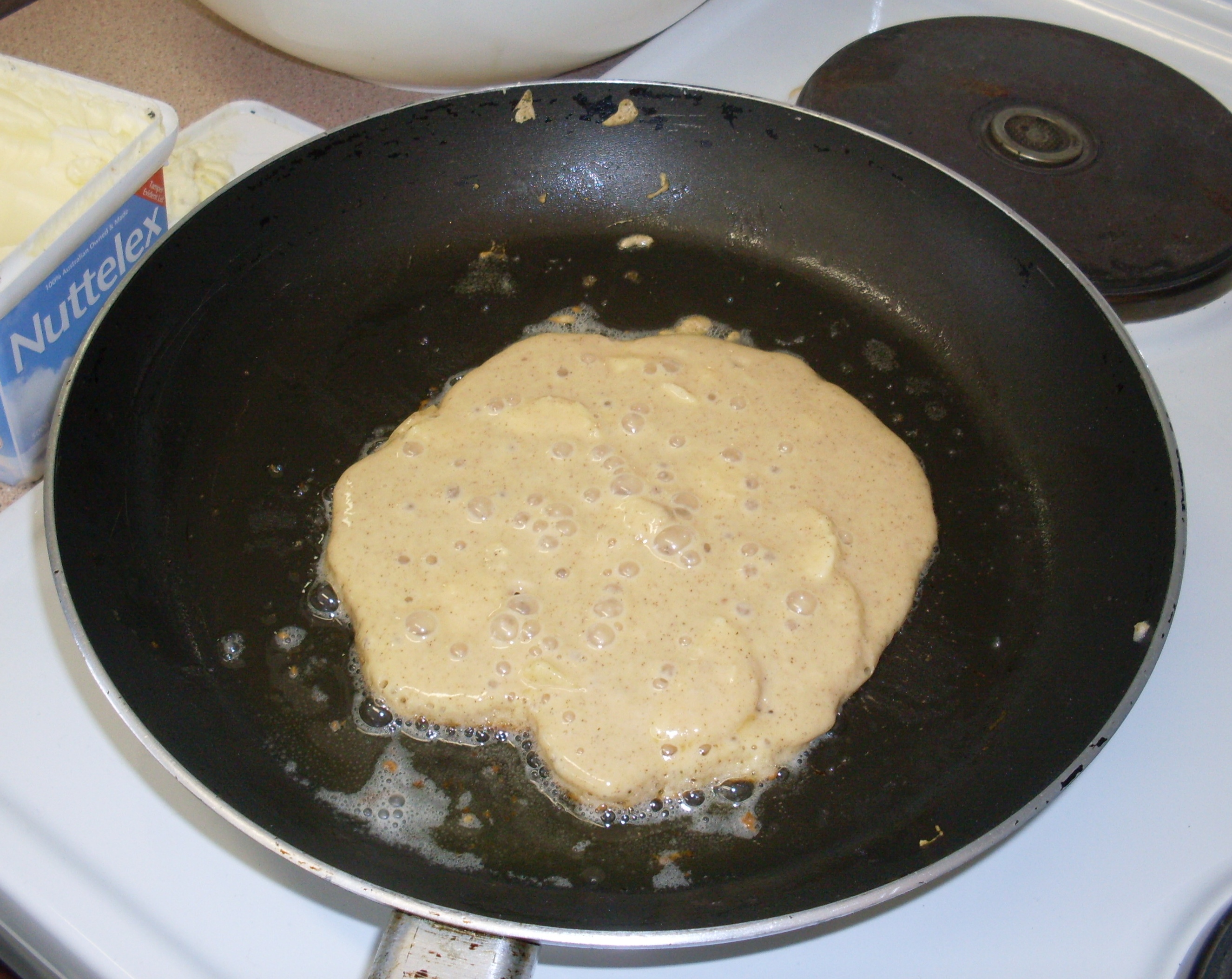 The banana pancakes were ‘interesting‘ but they really were very heavy because they used wholemeal flour and the banana and cinnamon got lost in the taste. We all agreed in the class that we wouldn’t be making these at home. 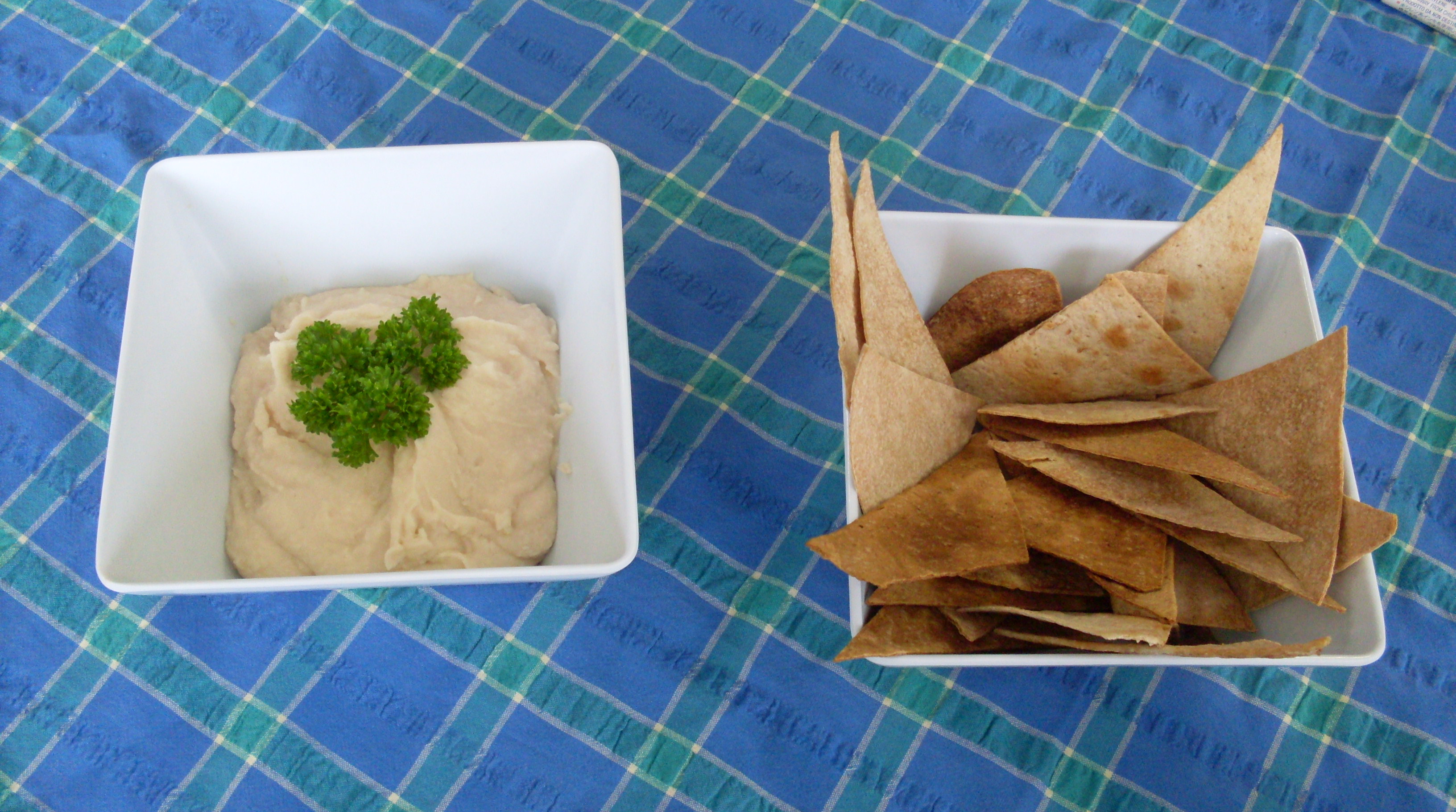 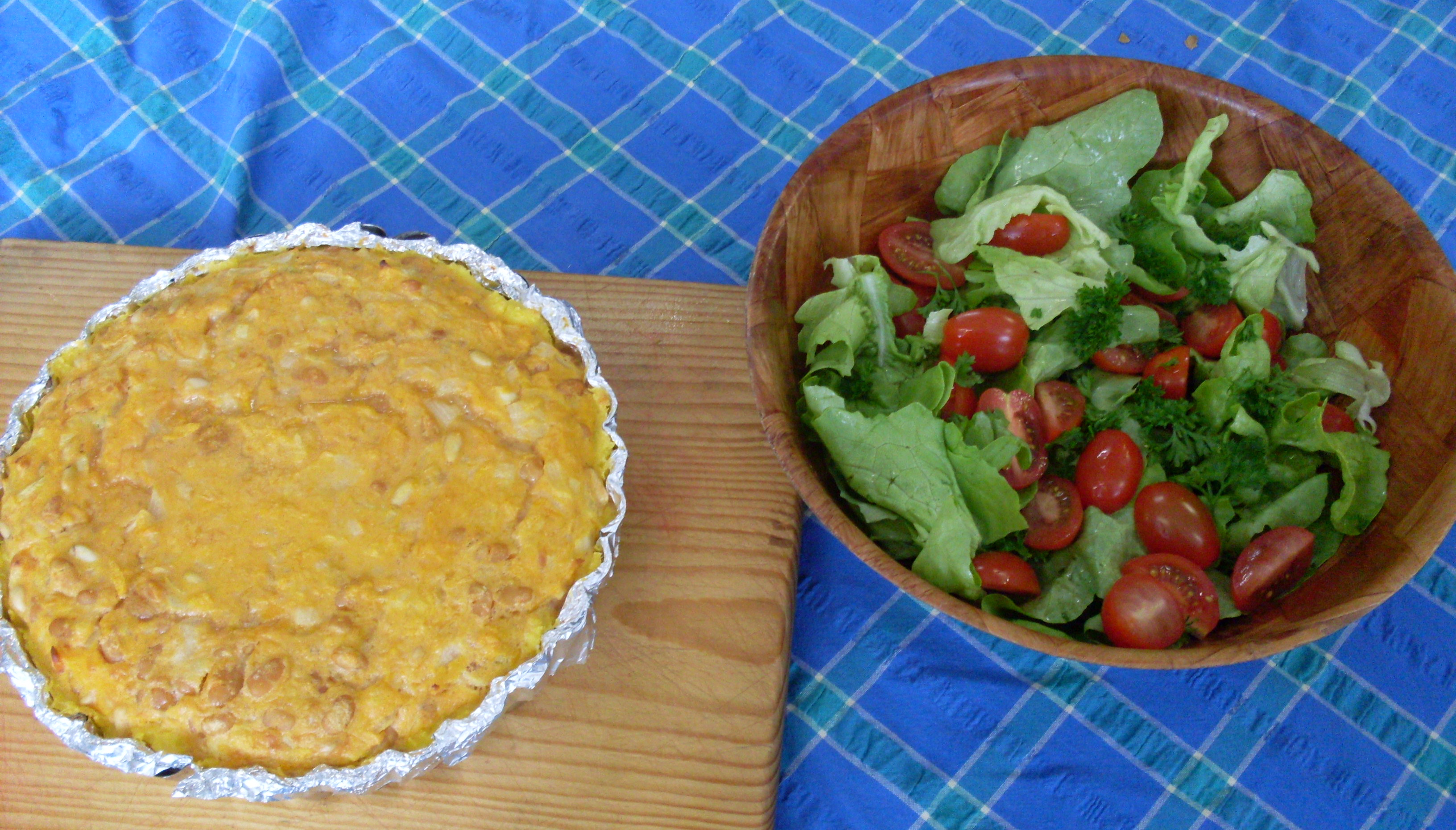 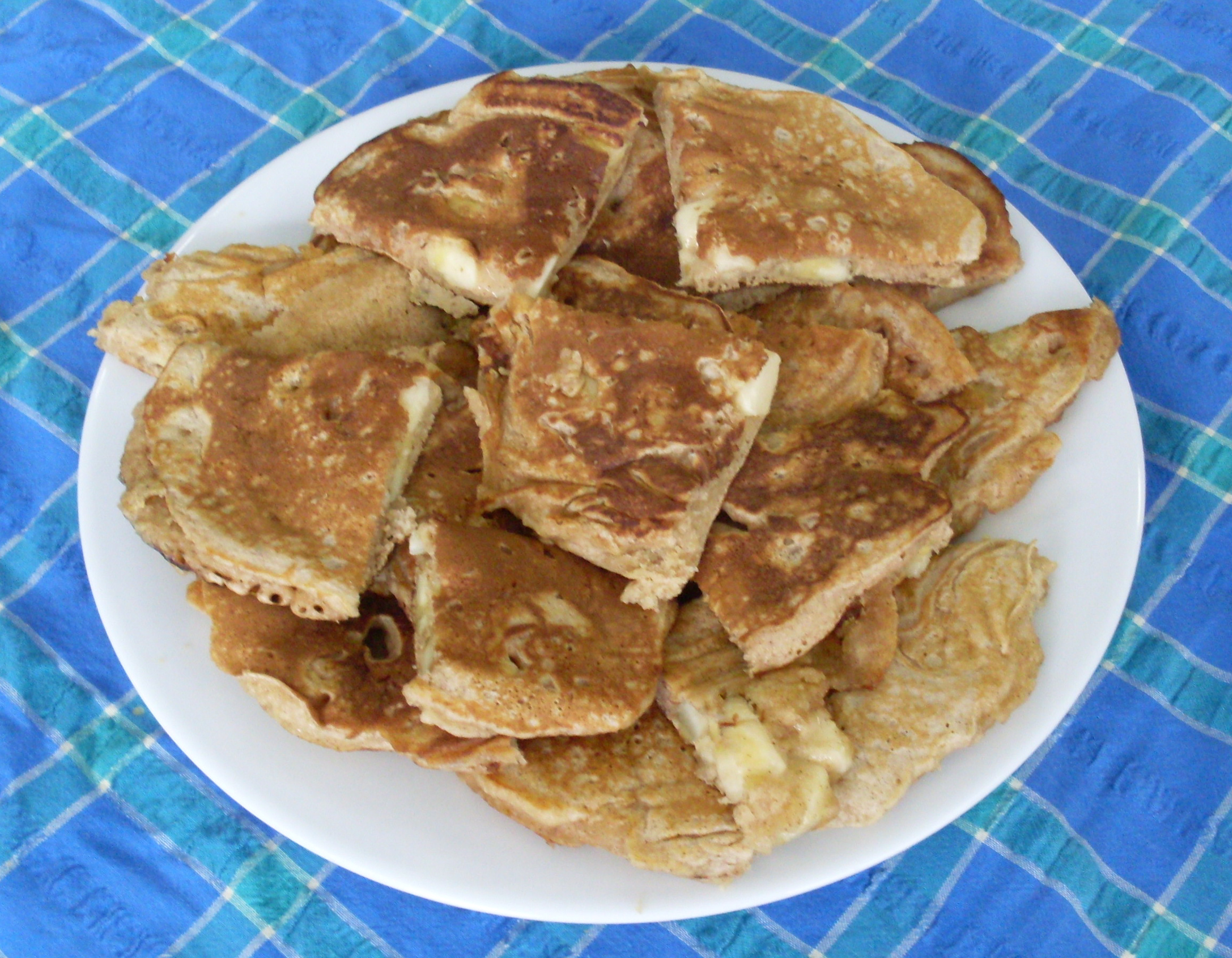 Next week is the last week and the menu is Sweet Potato Soup, Fettucine with Tomato and Chick Peas, Vegetarian Kebabs (will be interesting to see how they thread beans onto kebab sticks) and Tuna Burger. Well at least there is no dip and the menu looks like it is substantial enough to actually have a lunch. The soup is going to be the longest item to make, with the rest being finished in a shorter time. 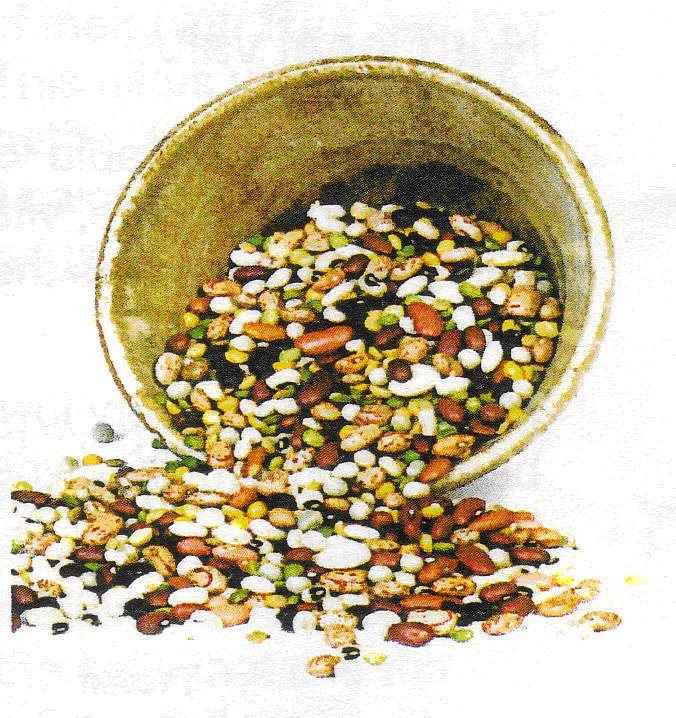 The Southern Fleurieu Health Service advertised recently about a 3 week cooking class called Bean Cuisine where you learnt how to include beans into your diet and learn how to cook with dried beans or legumes. I decided that I would like to do this class.

We were split into 4 groups and each team were to prepare a separate dish.

I was in the Spicy Mexican Pizza group.

In bowl, combine mince and beans. Spread over pizza base, then top with onion, coriander (we chopped this) and grated cheese. 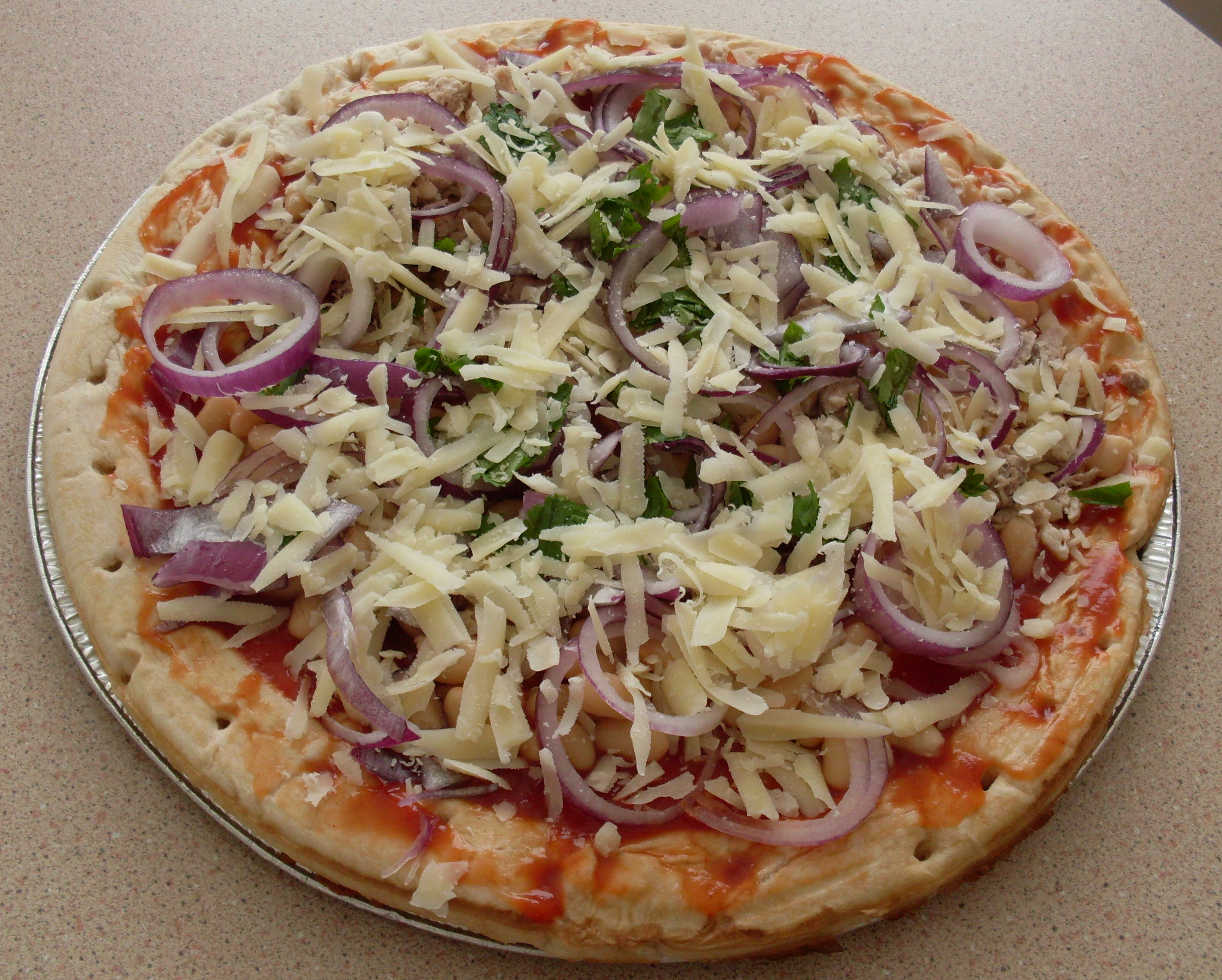 Bake for 10 – 15 minutes, until base is crisp and cheese melts. Serve in wedges, topped with guacamole and yoghurt.

I have to say that most of the ingredients were already made or prepared. The chicken was cooked and diced, the pizza base was a pre-made/bought one. The guacamole was store-bought avocado dip. The yoghurt was actually home-made with an Easiyo yoghurt maker (I have one of these and it makes the best yoghurt). We made half of this with the chicken and half without so there was a vegetarian option. Quite a few in the class were vegetarian (as you would sort of expect for a bean cooking class). The taco sauce was from the supermarket.

Blend beans, garlic, cheese, margarine, lemon juice and seasonings until smooth. The team used a stick/stab blender to do this. Add chopped herbs and continue to blend. Spoon into 4 or 5 lightly oiled ramekins or a serving dish with the bases lined with discs of non-stick paper (huh? wonder why, this seems to be fiddly, I wouldn’t bother with the paper or oiling the ramekins ). Chill the pate so it sets firm. Spread onto toasted fingers of wholemeal bread.

This turned out quite nice looking, Don’t know where the vegetable crudites part of the title came into it as there were no vegetables in sight or mentioned in the method. It tasted very bland, had a nice texture though. That team served it with jatz type biscuits (supplied by the class instructors, so not their choice) which really were too ‘heavy’ for this style of dip. It wasn’t a robust dip. It should have had rice crackers or those thin wafer biscuits instead, or even vegetable crudites 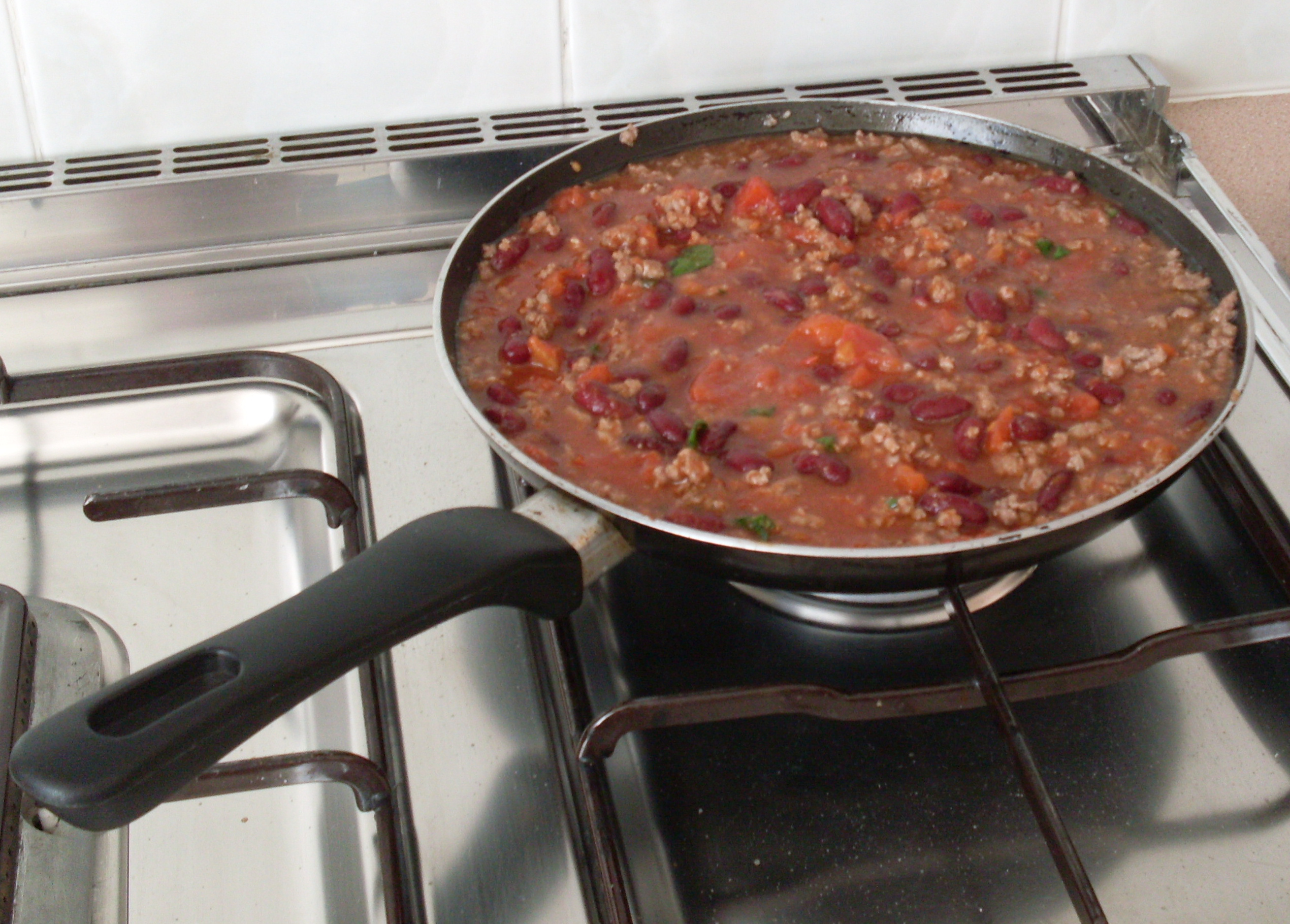 Spoon into pan. Add basil to the mash potato and spoon onto meat mixture. Sprinkle with cheese and grill until golden brown.

This was very tasty and looked appealing as well. Unfortunately about half the class didn’t have any because they were vegetarians.

Place ¼ cup filling onto bottom left corner of strip. Fold bottom right of strip diagonally across filling to form a triangle. Keep folding triangle shape until end of strip. Repeat with rest of filling. Place seam side down on trays, brush with egg and sprinkle with sesame seeds. Bake 15 minutes until golden. 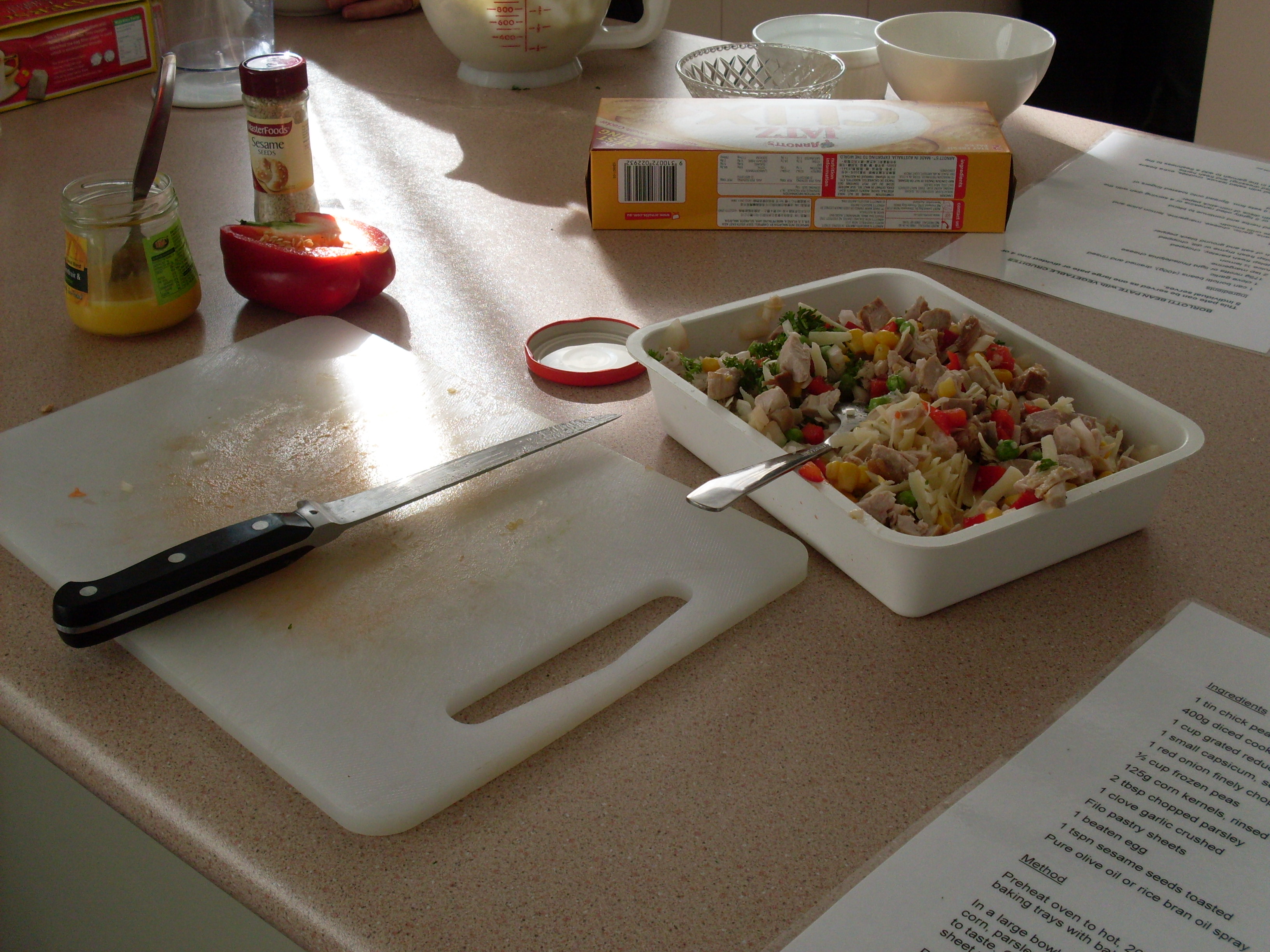 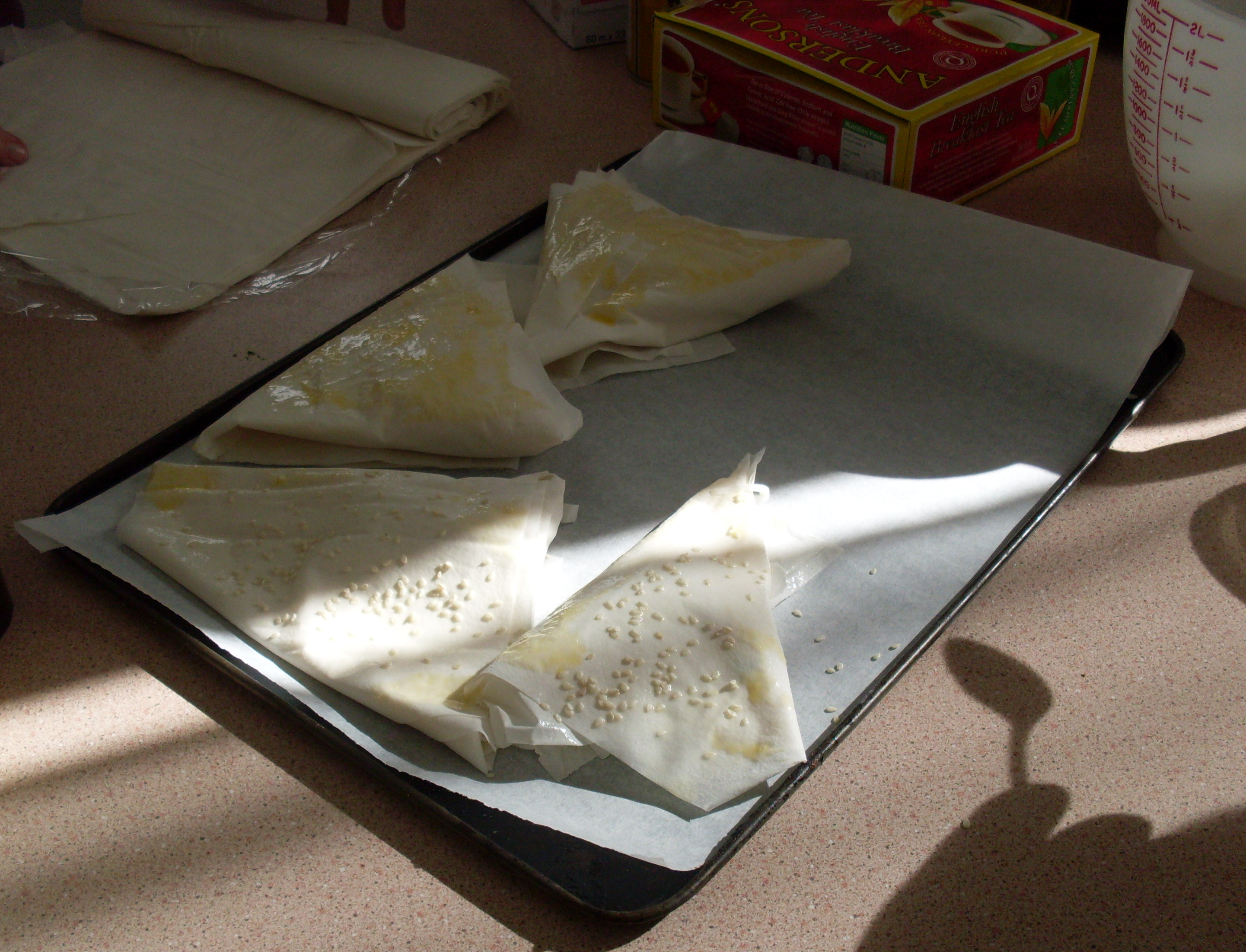 These looked good when they came out of the oven but the reality was they were not nice. There was far too much filo pastry and it was extremely dry. There wasn’t enough filling in them to moisten the pastry. Again the vegetarians in the group didn’t have any because they had chicken in the filling. These were the least popular of the items we cooked.

I have to admit I was surprised at the amount of meat dishes, quite a few in the class enrolled because they were vegetarian and really there was only the dip and the half meatless pizza that they could sample. Being a dried bean class really was ideal for vegetarians. 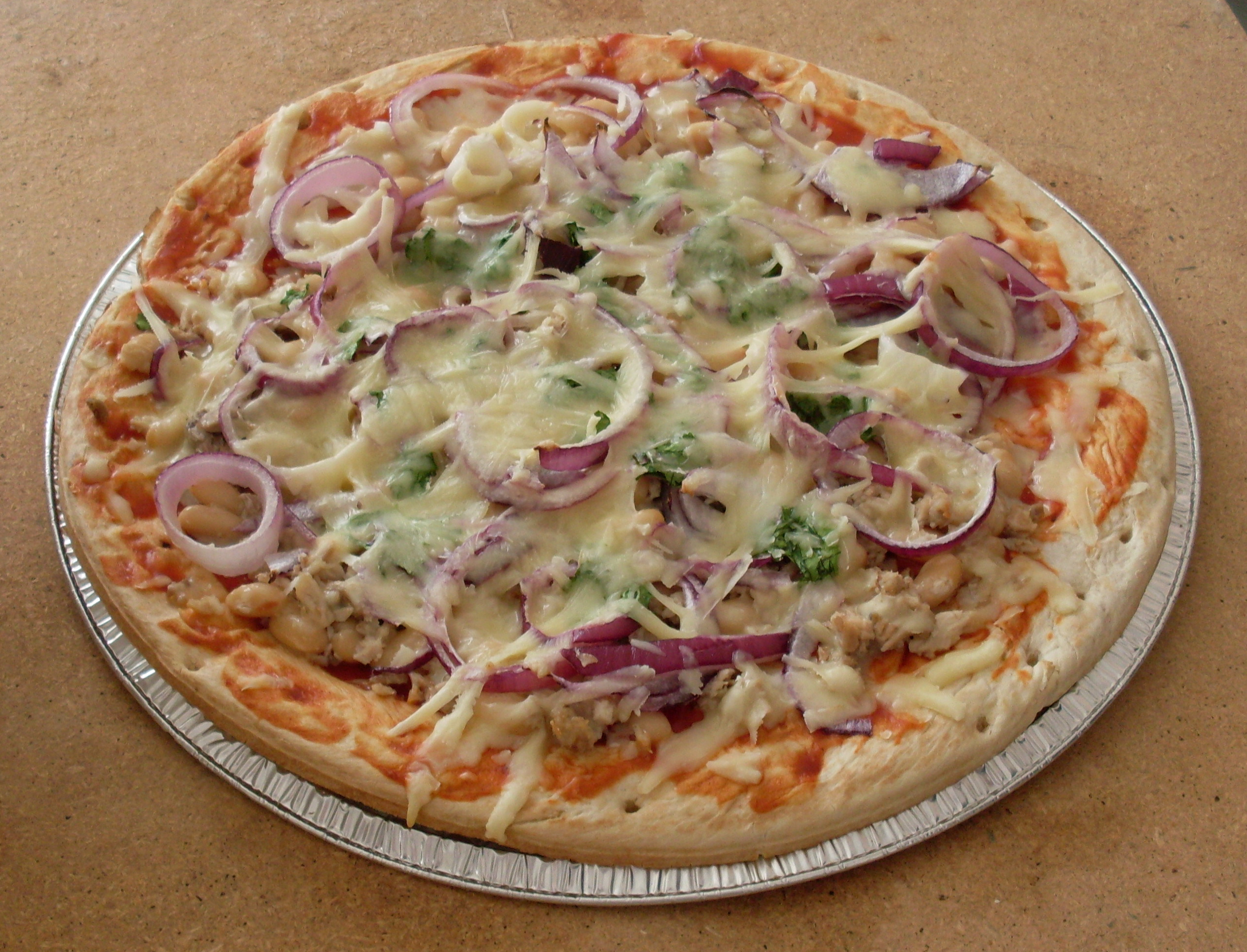 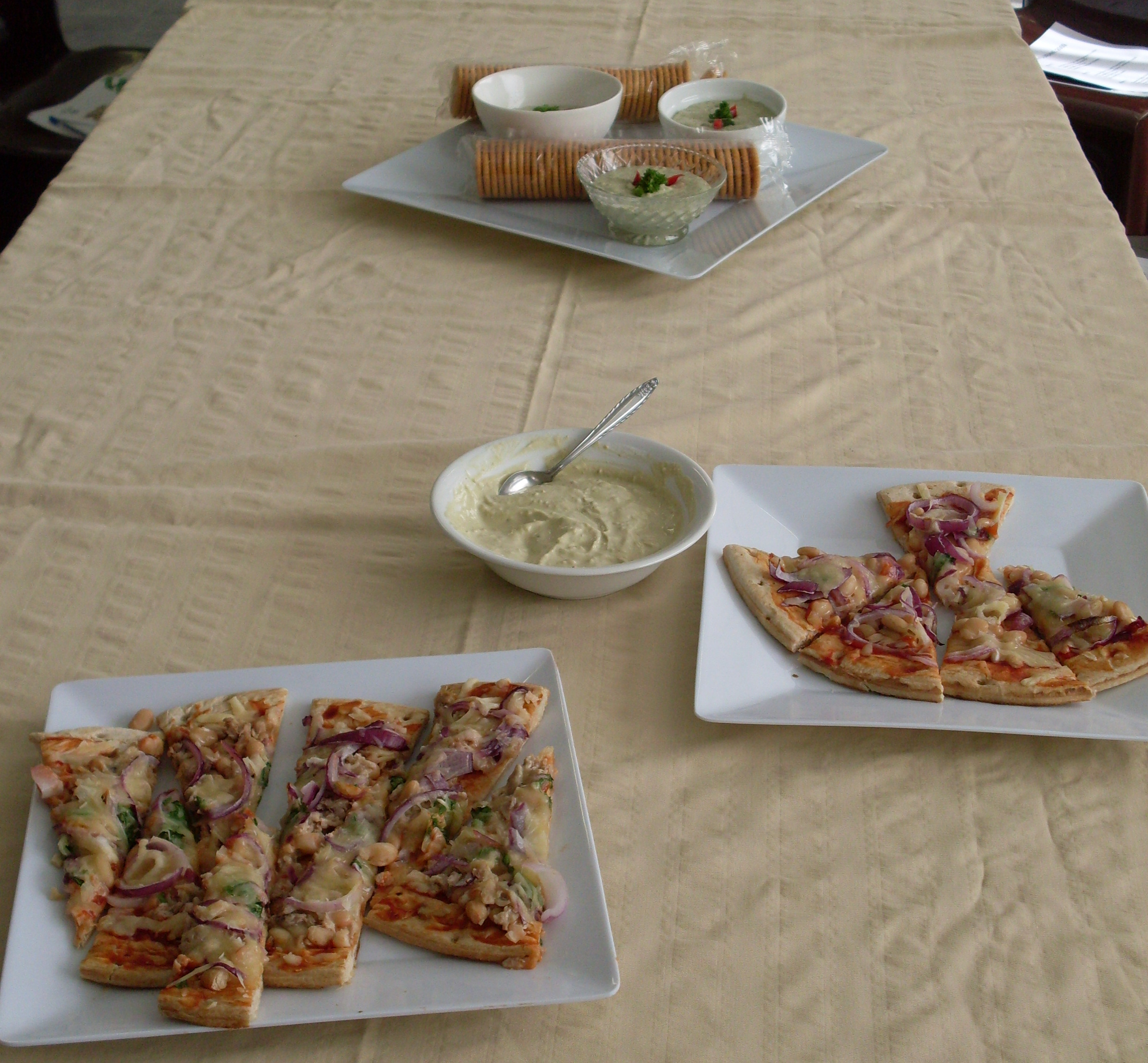 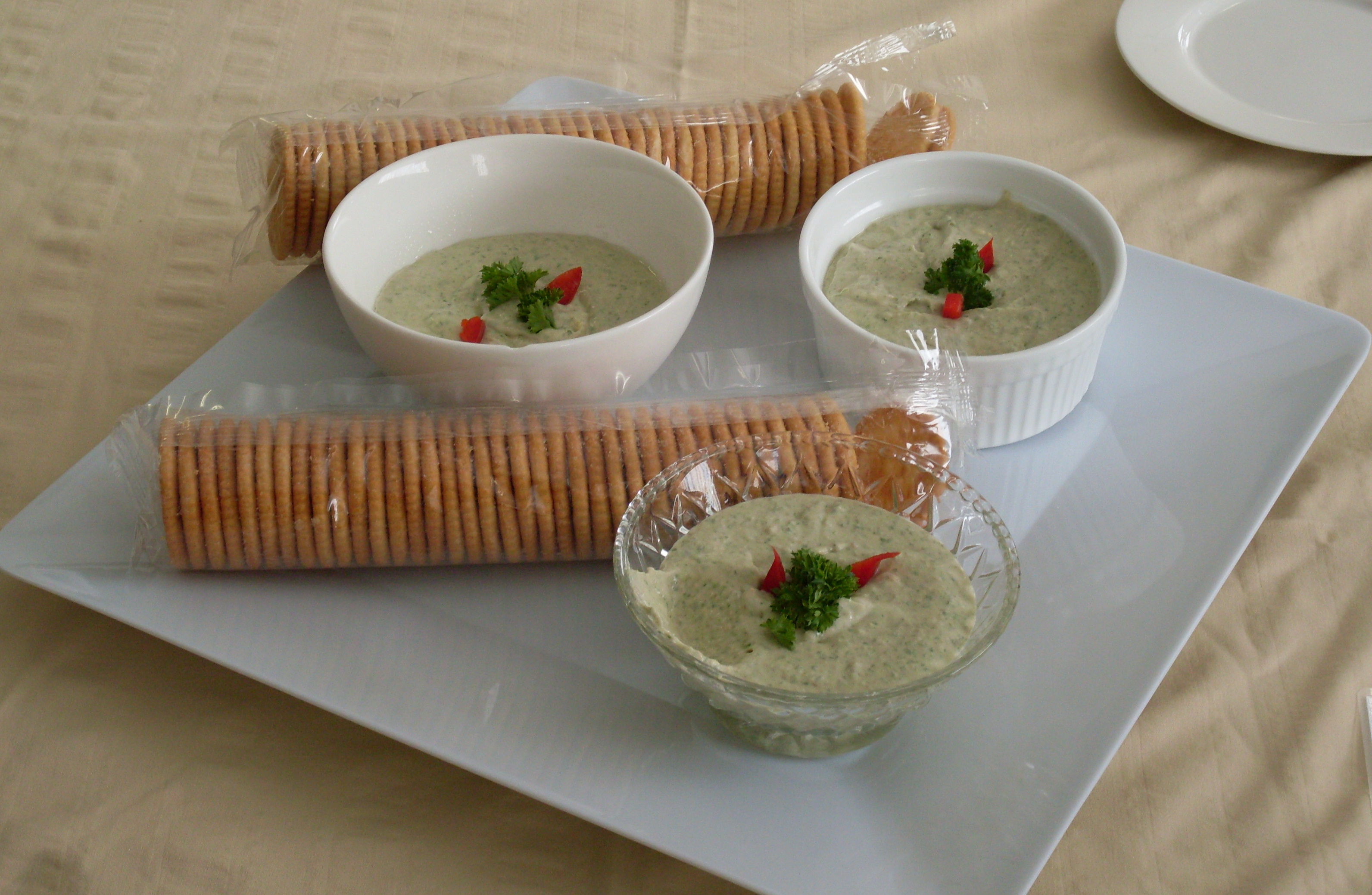 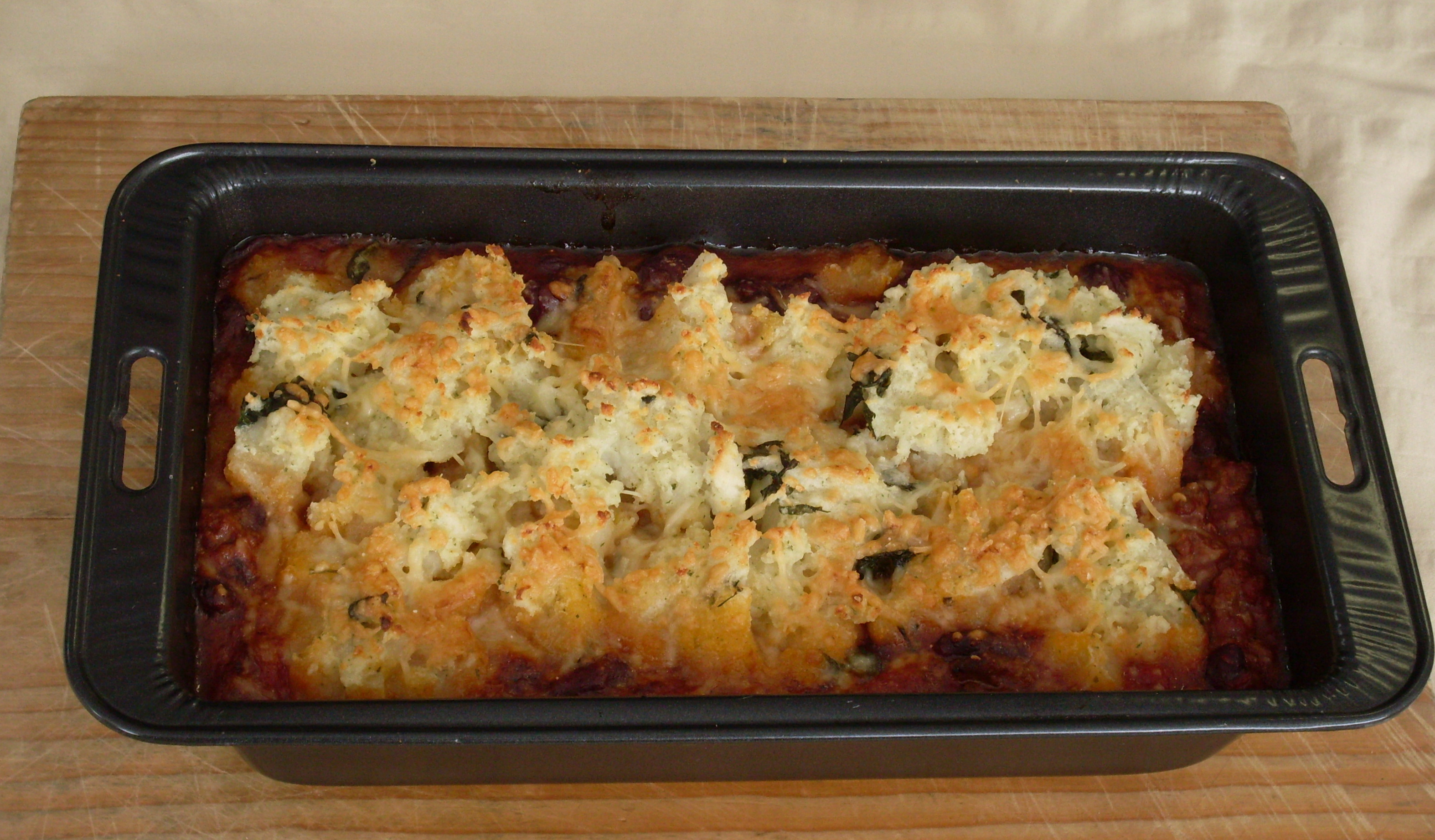 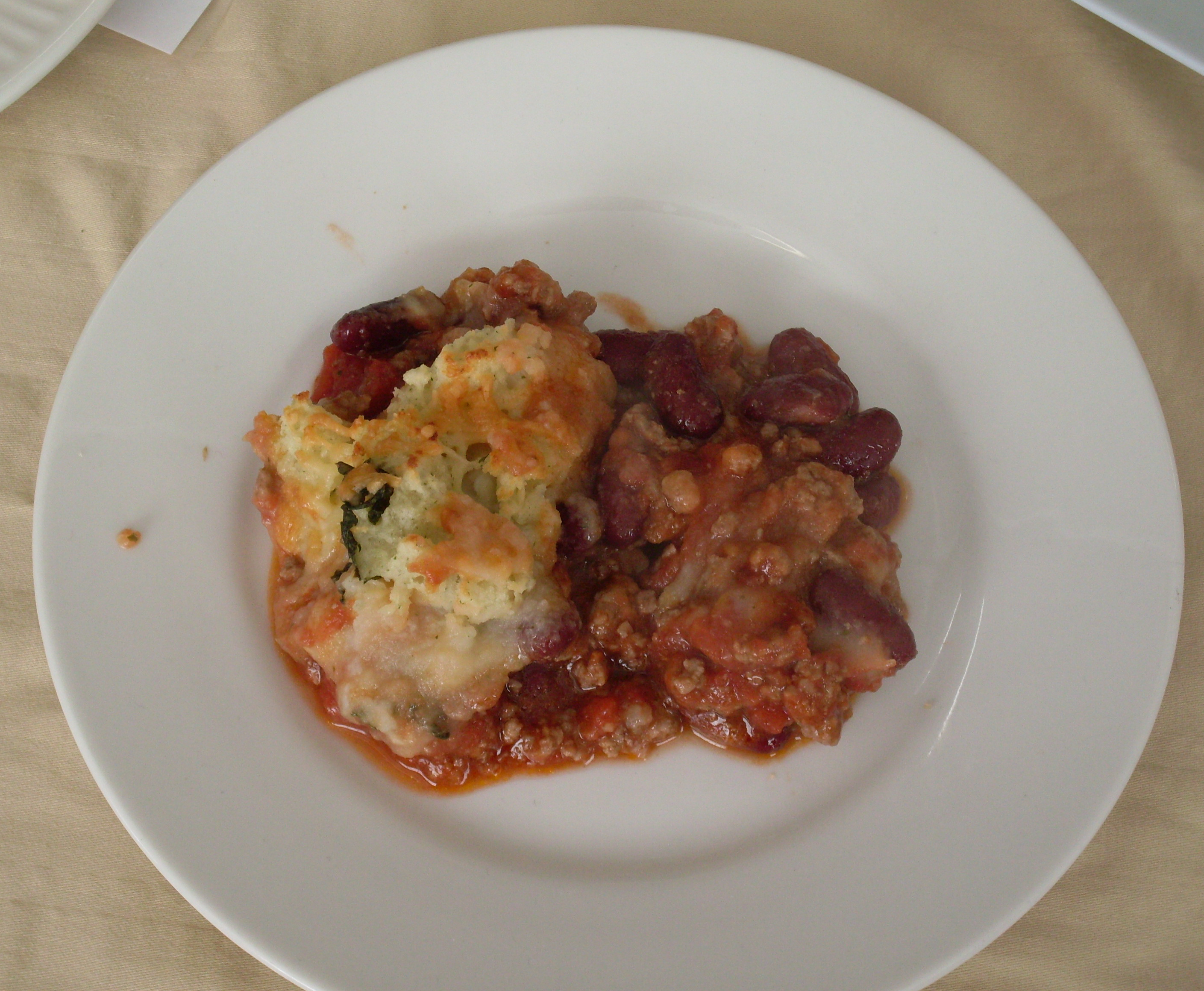 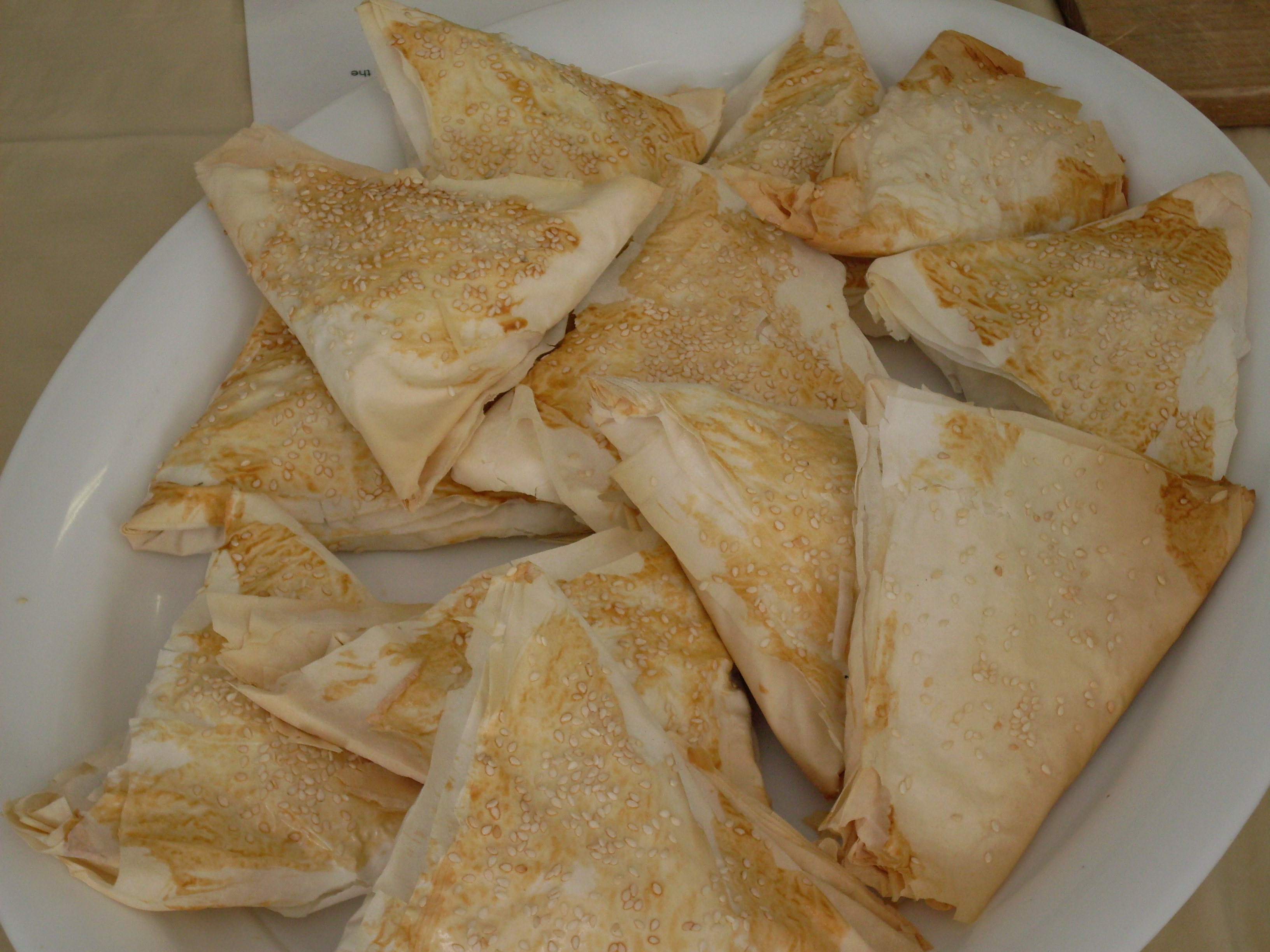 The class finished an hour early and the lunch that was part of the class was not enough. It was more like a taster and many went home without eating anything other than some dip and a wedge of meat-less pizza. I have to admit I was disappointed in the scope of the class. I was surprised that no dried beans were used but tinned ones only. I suspect that the next 2 weeks are going to be similar with no surprises or innovation or even different ways of cooking with and using beans in our diets. The instructors were ill prepared, were unaware at how many were booked in so didn’t have enough class notes initially. They didn’t know where things were kept in the kitchen, we couldn’t find the mixing bowls, they didn’t know how to light the electronic stove. If I had not paid for the 3 weeks upfront (and everyone had to) I doubt if I would be bothered going back. Add to this the cost of petrol and time taken for me (70km round trip) to get to the class and I am disappointed I actually learnt nothing. I was surprised that the Health Service didn’t check peoples diet requirements, they had to expect many vegetarians for a bean class surely.

Anyway in next weeks class we are making Butter Bean Dip with toasted pitta (tinned beans again I bet), Pumpkin & Baked Bean Quiche with salad (will be tinned baked beans for sure), Chile Con Elote (I googled elote and it is corn) and Banana Pancakes (now this has me intruiged and I might learn something with this). So look out for next weeks lesson.