Due to the drought and over-allocation of water upstream of Wellington the bottom end of the Murray River has dried out. The Murray mouth has had dredges at it for the last 7 years dredging to keep it open. Lakes Alexandrina and Albert are drying up and the Goolwa Channel to the barrage has become mostly sand flats. The boating community have removed their boats and there is much debate about letting sea water through into the channel and lakes. One of the main problems seen is the sandy bottom has been turning acidic as it is exposed to the air. There has been a lot of bio-remediation happening with planting of vegetation around the acidic soils and lime

There is much talk by the SA government of building a weir across the channel at Wellington ‘as a last resort‘ and approval has not been given yet for that construction, what is interesting though is that land has been acquired, access through properties acquired and construction of the road-ways and access etc. is already happening. For something that ‘isn’t going to happen‘ there sure is a lot of building going on.

As part of possible solutions to the acidic soils, loss of tourism $’s and general inaction (dredges have been at the Murray Mouth 7 years now to keep it open) by federal and state governments several proposals were floated to overcome the lack of water at the end of the Murray River. The solution approved was the building of 3 ‘regulators’ across the Goolwa Channel from Hindmarsh Island to Clayton Bay, across the mouth of the Finniss River and across the mouth of Currency Creek. The ones across Currency Creek and Finniss River are proposed to keep the water in those rivers. The estimated cost of these ‘ regulators’ is $26million. 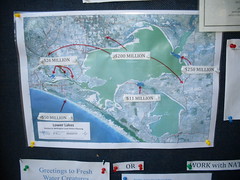 The one from Hindmarsh Island to Clayton Bay is to keep water in Lake Alexandrina. Many locals feel that this regulator will also then allow the barrage at Goolwa to be opened and allow sea water into the Goolwa channel for boaties.

On Hindmarsh Island for the last couple of weeks there has been continuous traffic of large dump trucks carting the sand/dirt as the Clayton Bay regulator is being built from the Hindmarsh Island side. I went and had a look further down Randell Road but access is through private property and I was unable to see the ‘regulator’ from Hindmarsh Island. 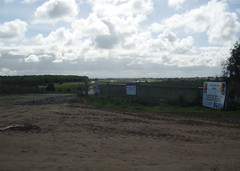 I decided to go for a Sunday drive to Clayton Bay to have a look at the ‘regulator’ being built and was stunned at the enormity and size of this thing. 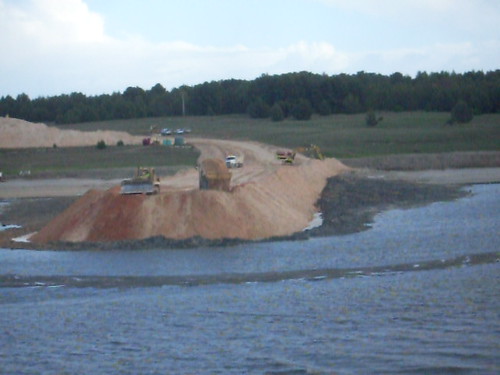 This isn’t a ‘regulator’. This is a dam!

After 2+ weeks of construction this earth wall is halfway across the river channel. It is massive in height as you can see from the size of the dump trucks on the top of it. This is supposed to be temporary. Yeah right, pull the other leg! There is no way this will ever be removed unless there is a flood of biblical proportions down the river. 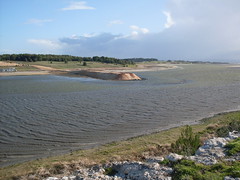 After you get over the enormity of this barrier you have to admire some of the features happening about it. There is a large mud wave being pushed out from the river bottom that is quite interesting to observe. The construction methods being used and how efficient the soil is being moved from the carrying trucks to the dump trucks and then dumped over the side with graders pushing out the soil. The noise is intrusive with flashing lights and reversing beepers being heard all over Clayton Bay. Clayton Bay has become a tourist attraction with many visitors coming to have a look. Of course there is the usual protestors at the site (and don’t get me wrong I have been a part of protest rallies when we have been trying to get out point across) who have a display and manned tent near the wharf and protest signs and flags at half mast for the death of the Murray River. 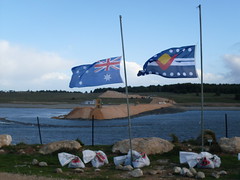 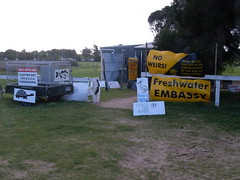 See more photos I took of my visit to Clayton Bay

I don’t think general Australia has a clue about what is going on here. I think we are all being conned and the mis-management of the Murray River by all governments concerned, past and present, is a national disgrace. Looking at the larger picture, other countries aren’t doing any better. The Aral Sea is a classic example.

Goolwa and the river Murray have been in the news a fair bit recently due to the lack of water in the river.

The lack of water is caused by several factors.

There has been several public rallys at the lack of Govt. inaction.

Goolwa is the last port on the River Murray before it exits to the ocean and due to drought and overuse of water allocation throughout Australia the River Murray has been slowly drying up.
At Goolwa the river is now below sea level. The Murray Mouth has had dredges at it keeping the mouth open for 5 years. The salinity of the river is now the equivilent of 50% sea water. Acid soils are spreading along the river banks. The river has stopped flowing.